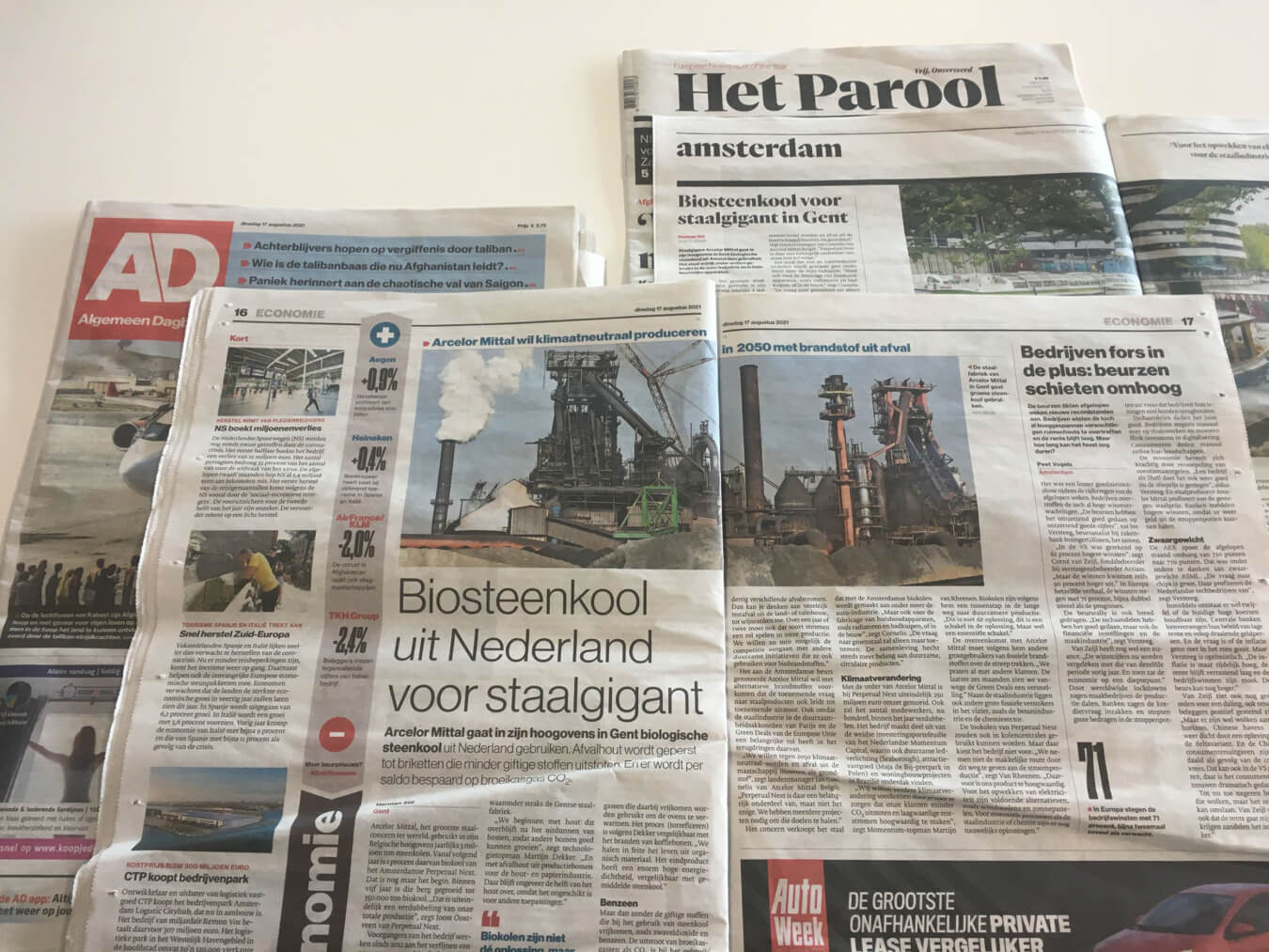 Following the deal with steel producer ArcelorMittal, the Dutch newspaper Het Parool interviewed Perpetual Next. A great introduction of what Perpetual Next stands for and what contribution we want to and can make to a more sustainable world.

Within the newspaper group DPG Media, this article was continued in eight other newspapers, including the AD, the newspaper with the largest readership in the Netherlands. The article was also published in: Brabants Dagblad, BN DeStem, De Stentor, Eindhovens Dagblad, de Gelderlander, PZC and Tubantia. The story has also been placed on the websites of the newspapers.

The article in Het Parool

The article in AD

Below is the English translation of the interview

Steel giant Arcelor Mittal is going to use biocoal from Amsterdam in its blast furnaces in Ghent, Flanders. The steel will be used in the car industry and in household appliances, among other things.

Arcelor Mittal, the largest steel concern in the world, uses 3 million tons of coal in its Belgian blast furnaces every year. Starting next year, 1 percent of that will be biocoal from Amsterdam-based Perpetual Next. Within five years, the company says, that mountain will have grown to 350,000 tonnes of biocoal. "That will eventually double our total production," says Joost Oostveen of Perpetual Next.

Since 2012, the company's predecessors have been working on refining a process to convert bio-waste - from forestry and agriculture, among others - into biocoal. To date, more than €100 million has been invested.

Perpetual Next owns the entire chain, from raw material to the technology needed to make biocoal. Production takes place both in the company's own factories - including in Estonia - and at major customers' premises, such as the Ghent steelworks.

Waste wood
"We start with wood that remains after thinning forests, so that other trees can grow well," says technology manager Martijn Dekker. "And with waste wood from production forests for the wood and paper industry. That's where about half of the wood now remains." According to Dekker, that is just the beginning. "We are looking at 30 different waste streams, from fibrous residual waste from agriculture or horticulture to vines.

The waste wood is heated in ovens developed by the company to 300 degrees, whereby it carbonises and can be pressed into briquettes or pellets. The gases released in the process are used to heat the furnaces. According to Dekker, the process (torrefaction) is comparable to roasting coffee beans.

"The end product has an enormously high energy density, comparable to average coal." The emission of greenhouse gases such as CO2 is similar. "But because the trees and plants we use have taken CO2 out of the air, you stay clean in the long run." Per tonne of biocoal, 2.5 tonnes of CO2 are saved on balance compared to a tonne of ordinary coal.

Arcelor Mittal, which is listed on the Amsterdam stock exchange, wants to use alternative fuels to prevent the increasing demand for steel products from also leading to increasing CO2 emissions. Also because the steel industry has an important role in the reduction of CO2 emissions in the Paris Sustainability Accords and the Green Deals of the European Union.

Perpetual Next's biocoal could also be used in coal-fired power stations. But the company has chosen not to. CEO Martijn Van Rheenen: "Our product is of too high quality for that. There are sufficient alternatives for generating electricity, such as wind turbines and solar panels. For essential processes like steel or chemicals, there are hardly any solutions yet."

Automotive industry
"We want to become climate neutral by 2050 and use waste from society as a raw material," says country manager Jan Cornelis of Arcelor Mittal Belgium. "Perpetual Next is an important part of that, but not the only one. We need several projects to achieve those goals."

The group sells the steel made with Amsterdam's biocoal to the automotive industry, among others. "But also for the manufacture of household appliances, such as radiators and bathtubs, or in the construction industry," says Cornelis. "The demand for green steel will only increase. Society is attaching more and more importance to sustainable, circular products."

The order from Arcelor Mittal will ultimately involve a turnover of EUR 250 million for Perpetual Next. The number of employees, now 100, will also double within the year. The company is part of the extensive investment portfolio of Amsterdam-based Momentum Capital, which also includes sustainable LED lighting (Seaborough), amusement real estate (Maya de Bij amusement park in Poland) and housing projects in Brazil.

"We want to prevent further climate change by ensuring that our customers emit less CO2," says Momentum CEO Martijn van Rheenen, "and make low-value waste streams high-value." Biocoal, he says, is an intermediate step in the long road to more sustainable production. "This is not the solution, this is a link in the solution. But an essential link."

Not for coal-fired power plants
According to him, the agreement with Arcelor Mittal should win over other large users of fossil fuels. "We are already talking to other customers. In the last six months we have seen an acceleration because of the European Green Deals." In addition to the steel industry, other large fossil fuel users are also in the crosshairs, such as the concrete industry and the chemical sector.

Perpetual Next's biocoal could also be used in coal-fired power stations. But the company has chosen not to. "We are not taking the easy route by giving this away to power production," says Van Rheenen. "Our product is too high quality for that. There are sufficient alternatives for generating electricity, such as wind turbines and solar panels. For essential processes like steel or chemicals, there are hardly any solutions yet."